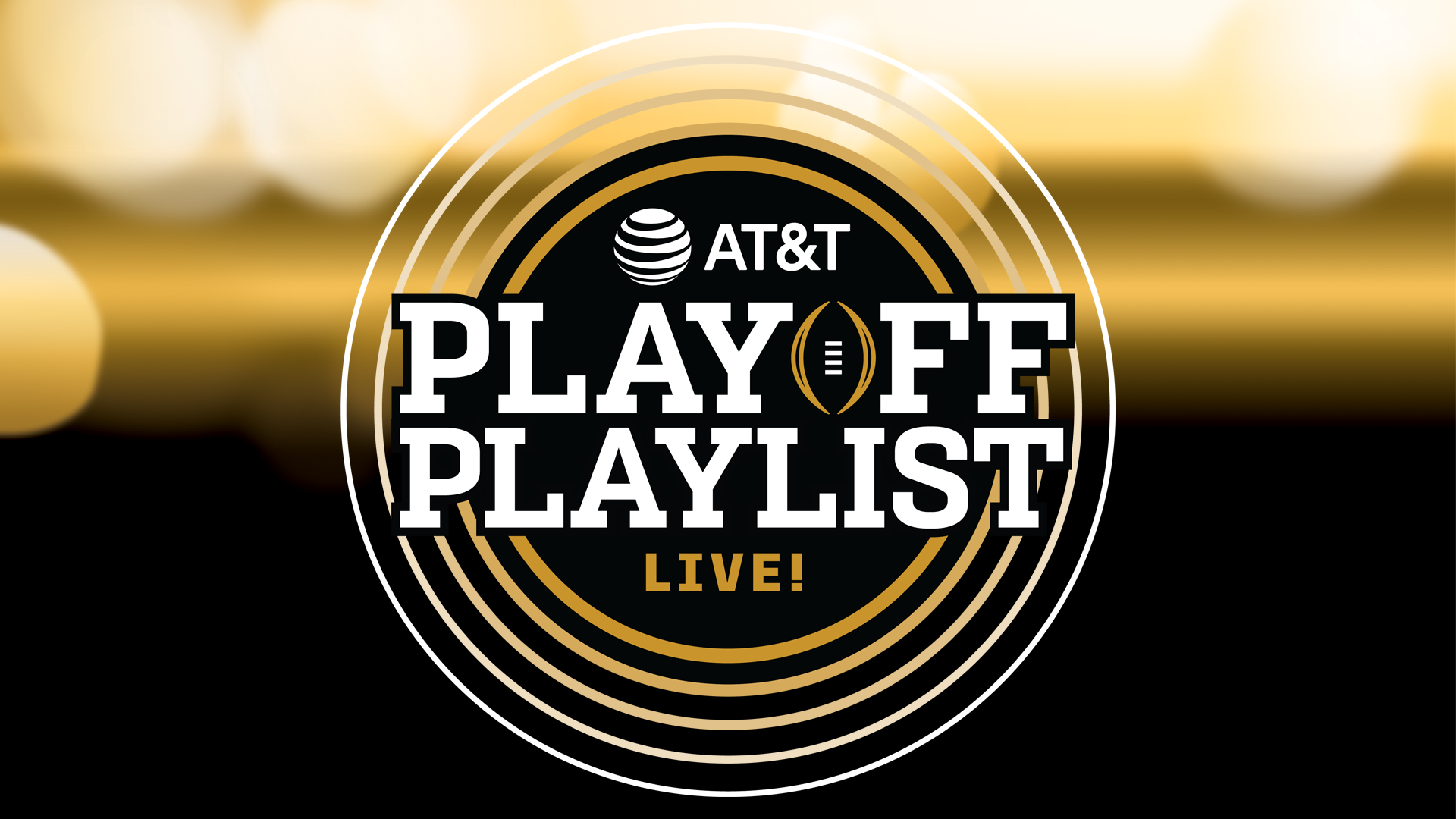 Gates for AT&T Playoff Playlist Live! will open at 6 p.m. PT each day at Banc of California Stadium. Fans will need to pre- register for event tickets online beginning Friday, December 2 at 10 a.m. PT. Access on the day of the concert will be on a first-come, first-served basis based on your digital ticket. For more information, visit collegefootballplayoff.com/ppl.

Additionally, AT&T will bring the show to fans at home and on-the-go with AT&T 5G Concert Lens – an interactive livestream experience. Using AT&T 5G connectivity, this feature will broadcast multiple camera angles simultaneously, allowing fans to select the vantage point from which they’ll watch the show. The concert will be streamed in the ESPN App.

For additional information on the College Football Playoff, including AT&T Playoff Playlist Live! and the 2023 CFP National Championship, visit collegefootballplayoff.com. Join the social conversation by using the hashtags #CFBPlayoff and #ATTPlaylistLive.

About the College Football Playoff

The College Football Playoff matches the No. 1 ranked team vs. No. 4, and No. 2 vs. No. 3 in semifinal games that rotate annually among six bowl games – the Goodyear Cotton Bowl, Vrbo Fiesta Bowl, Chick-fil-A Peach Bowl, Capital One Orange Bowl, Allstate Sugar Bowl and Rose Bowl Game. This season’s Playoff Semifinals will take place Saturday, December 31, 2022 at the Vrbo Fiesta Bowl and Chick-fil-A Peach Bowl. The Los Angeles region will host the College Football Playoff National Championship on Monday, January 9, 2023, at SoFi Stadium.

Jonas Brothers took the world by storm in 2019 with the release of their critically acclaimed single “Sucker” following a six-year hiatus. The triple-platinum single debuted at #1 on Billboard’s Hot 100, becoming the first #1 debut from a group this century. The band went on to release Chasing Happiness, an Amazon Original film along with their third #1 album, the platinum-selling Happiness Begins (Republic Records). The trio continued to soar with their sold-out “Happiness Begins Tour,” selling over 1.2 million tickets and garnering a bevy of awards, including three Billboard Music Awards, MTV VMA and iHeart Music Awards and a GRAMMY® nomination. Jonas Brothers only accelerated this momentum in 2021 with the 44-date REMEMBER THIS Tour. Earlier this year, it was announced that the Jonas Brothers will receive their own star on the Hollywood Walk of Fame in 2023, a testament the group’s enduring star-power.

Pitbull invites disruption globally as a GRAMMY®-winning independent international superstar, education advocate, business entrepreneur and motivational speaker. With countless awards, dozens of international #1’s, hundreds of gold and platinum certifications, millions of single sales, 25 million album sales, and over 15 Billion video views, one of the most impressive careers in music history set him to make true change. Pitbull helped establish Sports Leadership Arts and Management (SLAM!) tuition-free public charter schools across the country. Pitbull became the co-owner of NASCAR team [Team Trackhouse] in 2021. He returned to the road in 2022 with the sold out Can’t Stop Us Now Tour, packing arenas coast-to-coast. Pitbull has performed for millions worldwide and even joined forces with the legendary, Tony Robbins, for engagements around the globe. He maximizes his own creative, entrepreneurial and personal freedom, yet again, on his next long-awaited English album, coming soon.

Los Angeles-based singer, songwriter, multi-instrumentalist Em Beihold sprinkles sunny melodies over sadness, sowing the seeds for pensive and powerful pop. Her debut single “Numb Little Bug” has been certified gold by the RIAA, surpassing 926 million global streams and reaching the Top 20 on the Billboard Hot 100. Em climbed to #1 on Billboard’s Emerging Artists Chart, capturing #1 on the Spotify Global Viral 50 Chart and hitting #1 on the Hot AC Radio airplay chart. The official music video has over 20 million views and counting. Em recently released her debut EP Egg in the Backseat to critical acclaim with V Magazine commenting, “With her unapologetically quirky attitude and unmatched flair for writing lyrics that encapsulate the feelings of an entire generation, it’s easy to understand why Beihold has found herself in the spotlight—and furthermore why it won’t be dimming down anytime soon.”

18-year-old singer/songwriter GAYLE’s incendiary debut EP a study of the human experience volume one (Atlantic Records/Arthouse Records) features her smash “abcdefu”: a double-platinum anthem that held the #1 spot on Top 40 radio for three consecutive weeks, topped the Billboard Global 200 AND hit the top 3 on the Billboard Hot 100. a study of the human experience volume two is a powerful new EP that doubles down on its predecessor’s unapologetic truth-telling. GAYLE’s accolades include appearing on Billboard’s “21 Under 21” list and on Variety’s “Power of Young Hollywood Impact Report” for 2022. Her latest triumphs including taking the stage at Wembley Stadium and touring with Tate McRae, AJR and My Chemical Romance. “If my music can help other people to make better sense of themselves, to come to terms with who they are and what they’re feeling, then that means the world to me.”

In addition to AT&T Playoff Playlist Live!, fans can participate and experience the following public events in Los Angeles leading up to the national championship game:

Media Day features one-hour sessions with student-athletes and coaches from each of the College Football Playoff National Championship participating teams. More than 1,000 credentialed media members will be present to cover the event, in addition to live broadcasts from ESPN and conference networks and activations by social media giants Twitter, Facebook, Instagram and TikTok. Media Day is free and open to the public. Fans are invited to watch and will be provided a complimentary small radio to listen in as student-athletes and coaches are interviewed by the participating media.

The Extra Yard for Teachers Summit is a gathering of local teachers who come together for high energy and relevant professional development and to hear inspiring speakers who recognize the hard work of those on the front lines of educating our students. Past speakers and presenters have included Miguel Cardona, U.S. Secretary of Education; Condoleezza Rice, former U.S. Secretary of State; Charles Best, founder of DonorsChoose.org; Desmond Howard, ESPN college football analyst and many more. The 2023 event offers in-person (for local educators) and virtual live and on- demand options for teachers across the country to attend. AT&T will serve as the virtual sponsor for the 2023 Extra Yard for Teachers Summit, giving educators everywhere the opportunity to virtually attend the event at no cost. Registration for both the in-person event and online options opens Thursday, November 17. To register, visit CFP-Foundation.org. For more information on how AT&T supports teachers, please visit ATT.com/teachers (eligibility & restrictions apply).

The Extra Yard 5K is a family-friendly run/walk in conjunction with the national championship game that offers a chance for locals, as well as out-of-town fans, to take part in the CFP festivities. The race will start and finish at Gilbert Lindsay Plaza in downtown Los Angeles. And, if you’re not in LA for the national championship game, you can join us virtually! Each Extra Yard 5K participant will receive a t-shirt and medal, while the top overall male and top overall female finishers (in- person) will each win two tickets to the 2023 CFP National Championship. All proceeds benefit Extra Yard for Teachers, the College Football Playoff Foundation’s primary platform that elevates the teaching profession. Registration is open now at ExtraYard5K.com.

Taste of the Championship Hudson Loft

Taste of the Championship is a premium dining experience and fundraising event on the eve of the CFP National Championship, offering attendees the opportunity to indulge in gourmet food and drink prepared by chefs local to the area and to the communities of the two teams participating in the 2023 national championship game. This premium event serves as a unique combination of an exploration of local cuisine and a celebration of the teaching profession. All proceeds benefit the CFP Foundation’s Extra Yard for Teachers platform. Tickets can be purchased by visiting TasteOfTheChampionship.com.

Allstate Championship Tailgate is the gathering place for fans with game tickets who want to experience extreme tailgating at the CFP National Championship. The free outdoor experience includes fan activities, games and entertainment. Attendees will enjoy the ultimate pregame atmosphere and tailgating favorites, along with ziplining, sponsor activations and more.