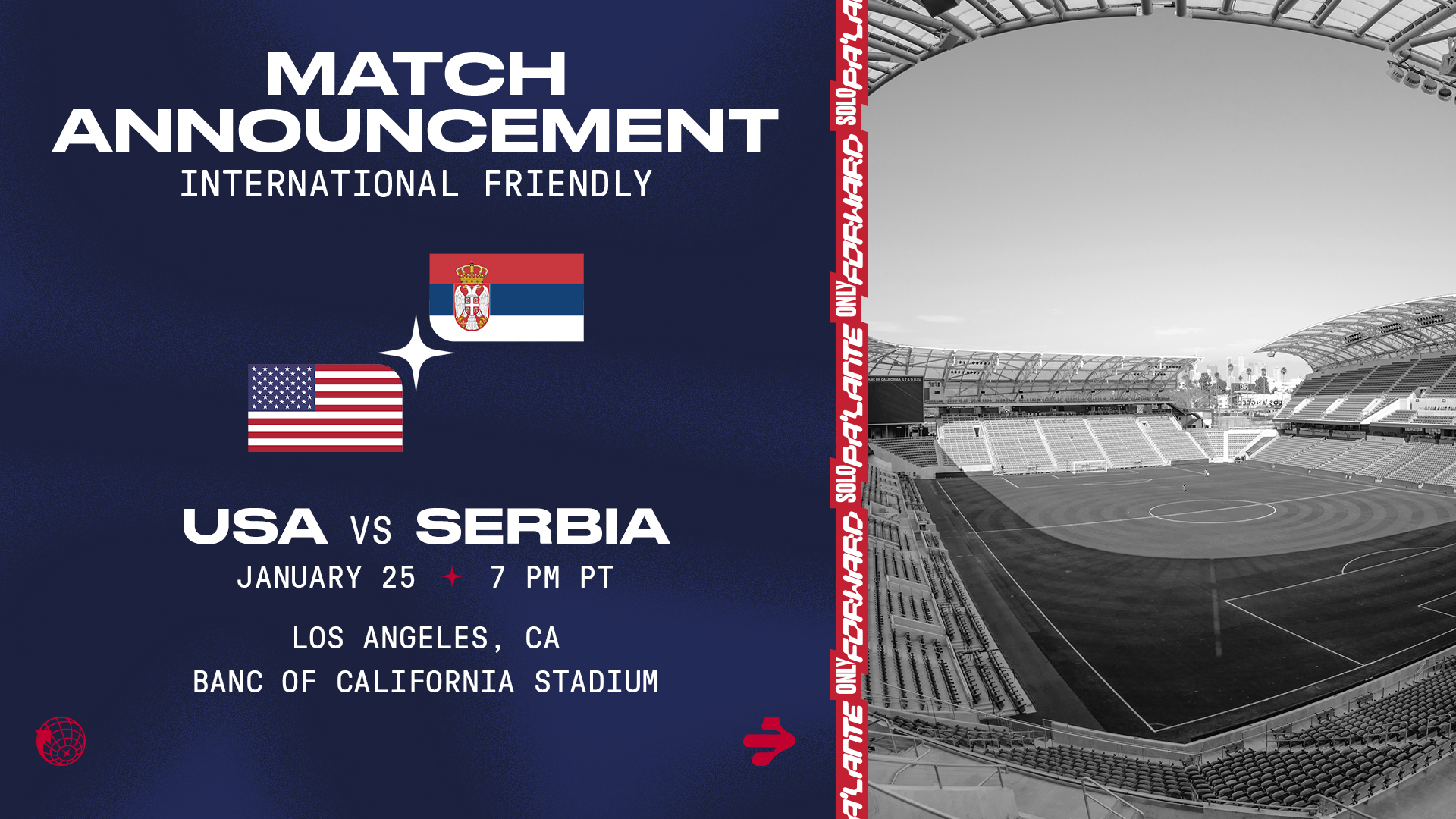 USMNT HEADS TO LOS ANGELES AREA TO KICK OFF 2023 AGAINST SERBIA ON JAN. 25 AND COLOMBIA ON JAN. 28

CHICAGO (Nov. 2, 2022) – The U.S. Men’s National Team will kick off the 2026 cycle with two matches in Southern California, facing Serbia on Wednesday, Jan. 25 at BMO Stadium in Los Angeles and Colombia on Saturday, Jan. 28 at Dignity Health Sports Park in Carson, Calif. As previously announced, Warner Bros. Discovery Sports will exclusively present the games, with specific distribution plans and kickoff times to be announced at a later date.

The two matches will be the first in the four-year run up to hosting the world’s biggest sporting event — the 2026 FIFA World Cup — alongside Canada and Mexico.

The U.S. will hit the ground running after its World Cup run in Qatar, as both scheduled opponents are currently ranked in the top 25 of the latest FIFA World Ranking. The USMNT has never defeated Serbia in their three prior meetings, last drawing the Orlovi 0-0 during a January 2017 friendly in San Diego. No. 17-ranked Colombia is a more frequent foe, with the USA posting a 3-13-4 record all-time against Los Cafeteros. The South American squad narrowly missed qualification to Qatar and last faced the USA in an October 2018 friendly topping the USMNT 4-2 in Tampa, Fla.

The USMNT will return to home soil in front of two of Major League Soccer’s best fan bases at LAFC’s Banc of California Stadium and the LA Galaxy’s Dignity Health Sports Park. USA-Serbia will be the first match for the USMNT at the Banc of California Stadium, one of the league’s state-of-the-art new stadiums and host of the upcoming 2022 MLS Cup between LAFC and the Philadelphia Union. Since DHSP opened in summer 2003, the USA has played a January or February match in Carson a total of 12 of the last 18 years.

Presales for the matches will begin on Monday, November 14 with the public sale beginning on November 21. Dependent on remaining ticket availability, groups of 20 or more can order at ussoccer.com starting Tuesday, November 22.

For the opportunity to buy tickets before the general public, fans should consider becoming U.S. Soccer Insiders. Membership is free for Standard Insiders. Learn more.

PRESALE SCHEDULE FOR USMNT vs. Serbia & Colombia ON January 25 & 28

VISA PRESALE
As the official payment technology sponsor of U.S. Soccer, Visa® has made special arrangements for Visa cardholders to participate in an advance sale of tickets. These advance sales will take place from Sunday, November 20 at 10 a.m. PT to Monday, November 21 at 8 a.m. PT through the purchase links at ussoccer.com. As the preferred card of U.S. Soccer, Visa will be the only payment method accepted during the Visa presale. Terms and conditions apply.

After the condensed World Cup qualifying schedule featured three Octagonal matches for the USMNT during January/February 2022, the USA returns to the passionate soccer community in the Los Angeles area for its launch of the 2026 World Cup cycle. The USMNT has played in California 114 times, more than any other state, with 43 of those matches taking place in Carson and Los Angeles. The USA is 12-2-3 at Dignity Health Sports Park all-time and 11-7-9 in matches played in Los Angeles proper.

January will mark just the fourth meeting all-time between the USMNT and Serbia, with the U.S. posting a 0-2-1 record since their first meeting against then Yugoslavia at the 1956 Olympics in Australia. The U.S. also dropped a tight 1-0 loss to Serbia at the 1998 FIFA World Cup in France.  The nations played to a scoreless draw to kick off the USA’s 2017 schedule on Jan. 29 at Qualcomm Stadium in San Diego.

Drawn into Group G for the World Cup, the Orlovi will face Brazil, Cameroon and Switzerland in Qatar as they seek to reach the knockout stage for the first time since 1998.

USA VS. COLOMBIA The USA will face a Colombia squad hungry to kickstart the 2026 World Cup cycle after missing the tournament for the first time since 2010. The U.S. will look to earn its first victory against the South American squad since March 2005, a 3-0 win in Fullerton, Calif. One of the USMNT’s most memorable World Cup victories came against Colombia in Southern California during the 1994 World Cup, a 2-1 win at the Rose Bowl in Pasadena featuring a goal from current U.S. Soccer Sporting Director Earnie Stewart.